Parents in the slums of Africa face a daily struggle to survive but a Triple P study suggests their dreams for their children appear the same as those of parents from more affluent countries.

The small study of 51 parents from Nairobi’s slum areas looked at whether strategies behind the University of Queensland’s Triple P – Positive Parenting Program would work in a highly disadvantaged setting. 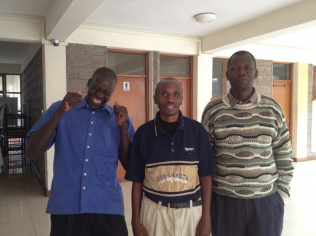 Photo: Dads who participated in the Nairobi Triple P trial.

The study set out to determine whether Triple P’s strategies would be culturally appropriate and useful to the Nairobi parents given that a large part of existing evidence on the program has been compiled from studies in developed nations.

The African parents, who live in areas where access to fresh water is limited, disease rates are high and most residents live in extreme poverty, said they now see parenting as something which can change the lives of their children.

“The parents were overwhelmingly positive about the program and really grateful and appreciative of any help we could give them,’’ said Divna Haslam, Head of International Research Development at UQ’s Parenting and Family Support Centre.

“But I was surprised at the types of strategies the families found useful. They said things things like ‘no one told me I should praise my children’ or ‘no one told me that I should show my children love and hug them’. The whole concept of paying positive attention to children was something new that they liked.’’

Dr Haslam said traditional African parenting followed a strict disciplinarian model where children “are seen but not heard’’ and the discipline could be harsh. But the parents involved in the study said they found strategies such as being available for their children, showing them attention and the need to be consistent changed their lives at home.

“These parents really are just as aspirational as western parents,’’ Dr Haslam said. “They saw the changes they could make as something really simple that they could achieve and that gave them a lot of confidence. It made them feel good about themselves. They now see parenting as something that can change the trajectory of their child’s life.’’

While some of the problems for parents in the slums of Nairobi appeared on the surface the same as those in western countries - such as sharing with siblings and not associating with children who misbehave - Dr Haslam said the consequences of not finding solutions to those problems could be more serious.

“The sorts of problems the parents would be having would be that one of their children might be eating all the food that they had for that day so the rest of the family would have to go hungry,’’ she said.

“And the high crime rate, drug use and associated violence in the slums meant that hanging out with the wrong crowd could create some quite serious problems, so parents need to start when the children are young.’’

Dr Haslam’s research was conducted in collaboration with the not-for-profit Parenting Africa Network and was funded by the Open Society Institute East Africa.